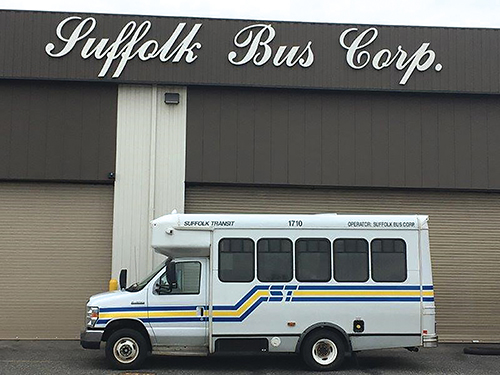 The fundamental job of fixed-route and paratransit services are the same: get passengers from point A to B in the shortest amount of time. There are other similarities but, right now, it’s the differences that matter. Paratransit already uses different scheduling software because they don’t travel along a fixed route; they are often door-to-door. So, why is it that the same CAD/AVL solutions are often used to power both modes? Wouldn’t it make sense, just like scheduling, that you’d have a solution designed specifically for paratransit? Suffolk County Transit and Suffolk Bus Corp put that idea into practice.

Because of the high demand for paratransit in Suffolk County, the agency requires an exacting in-vehicle solution to manage the sheer number of trips being transmitted between dispatch and drivers. In 2018 when Ray Grimaldi, vice president of Suffolk Bus Corp, was visiting a sister agency in New York, he was impressed by the efficiency and orderliness of that county’s dispatch office.

“I was so impressed by how quiet and structured their office was, and how alike their system was to Suffolk County in terms of comprehensiveness and on-time service,” Grimaldi said, “so I asked some questions and was directed to their software system DriverMate.”

While Suffolk County wasn’t looking for a new in-vehicle dispatch solution, Grimaldi’s interest in DriverMate sparked the idea that maybe it was time to try something more robust and easier to use for its paratransit system. Together, Grimaldi and Chris Chatterton — principal transportation planner for Suffolk County — decided to pilot DriverMate.

“[The system] reduces radio chatter and allows the dispatcher a better opportunity to respond cleanly and clearly.”

Trapeze DriverMate is special in the sense that it is specifically designed for demand-response services, and it utilizes smartphones and mobile devices to streamline communications between drivers, dispatch and the “back office.”

Organizing demonstrations, training, and piloting the program was relatively uncomplicated for the transportation system.

“The logistics of the rollout were very well documented,” Grimaldi said. “Trapeze provided hands-on training, which was invaluable, and we were able to give feedback on what worked for us and what didn’t. From there, we were able to effectively ‘train our trainers,’ and ultimately, our trainers seamlessly trained the drivers.”

Initially piloting the system on 5% of its paratransit fleet, agency and county officials closely monitored feedback from drivers as well as dispatch staff. Grimaldi and Chatterton were pleased to learn from staff that communications between drivers and dispatchers had become mostly non-audible — handled through pre-populated (or canned) messages generated by the system.

“It reduces radio chatter and allows the dispatcher a better opportunity to respond cleanly and clearly,” Grimaldi said.

To emphasize this point, Grimaldi pointed out that during Suffolk County’s peak hour starting at 1:00 p.m., 171 paratransit vehicles are on the road. At any point, every one of those vehicles’ drivers may need to communicate with dispatch — of which, there are only two for Suffolk Bus Corp’s paratransit operations. The introduction of DriverMate, even to only 10% of the fleet, has made a notable difference in peak-hour dispatching.

“It’s also nice that you aren’t going through another party — you’re going from Trapeze to Trapeze — so it cuts out a layer of technology which makes things simpler and work better,” Chatterton said.

After the pilot’s initial success, Suffolk County has elected to expand the program to 10% of its fleet.

“If you transpose a fixed-route CAD/AVL system onto a demand-response operation, it can often result in exceedingly high costs and less efficiency,” Zarr said. “Whereas a full, fixed-route system can cost upwards of $10,000 per bus to install and integrate, this is a commercial-grade mobile tablet. Between the cost and ideal application, Suffolk County is very astute to have chosen a paratransit solution for a paratransit operation.”