Brent Maitland, MCI Vice President of Marketing and Product Planning, says MCI watched for several years as the motorcoach market developed a need for 35-foot vehicles. The company saw numerous requests from charter, tour and limousine operators for a smaller coach with parts commonality to MCI coaches they already owned.

Finally, under New Flyer’s leadership and investment in 2017, Maitland says MCI was able to put resources behind the development of the J3500.

The J3500 accommodates 40 passengers with exceptional legroom and up to 44 comfortably, and Maitland says the J-Series’ accommodations will make the coach a welcome entrant into the marketplace of midsized vehicles. Furthermore, Maitland says the “coach experience” is enhanced by the J3500’s ride quality and passenger comfort as compared to cutaway shuttles and mini-buses.

“It offers a ‘coach’ experience as opposed to a ‘bus’ experience,” he says. “Many operators servicing smaller groups have relied on mini-buses or cutaways with shorter lifespans. The stainless steel, semi-monocoque construction of the J-Series provides an approximately 15 to 20-year lifespan.”

The 2019 J3500 features the same interior enhancements and space maximization which MCI introduced to the J4500 in 2018. Maitland says that the J3500, like its big brother, features best-in-class legroom and floor space. This is due in part to the J-Series’ recently remodeled lavatory and engine air-intake. By shifting the position and layouts of these two features, MCI’s engineers were able to maximize floor space and, in the case of the air intake, provide a quieter ride.

For passengers, the coach features a new larger rear-transom window and an optional rear-window for better passenger viewing. The redesigned interior includes the best-in-class parcel rack capacity that has always been synonymous with J-Series coaches.

“This coach has the best ‘payload’ in the industry,” Maitland says. “It can carry, with all other factors being equal, more passengers and more luggage. With the enhanced efficiency from the maximized interior space, operators will either get more passengers, or more passenger legroom than from the vehicle’s closest competitor.”

Interior enhancements are offered at two specifications: MCI’s Preferred Spec, the well-equipped stock unit; and MCI’s High-Spec, which includes pre-determined option package upgrades for trim, seating and lighting. All trim levels have color-coordinated interior themes, with a choice of Amaya A-220, GT or Kiel 2050 seating.

Of course, MCI is glad to build a coach to a customer’s specific tastes and branding requirements.

As it did with the J4500, MCI worked with Designworks, a BMW Group Company, to upgrade the coach’s interior aesthetics – beginning with the new spiral stairway and handrail with optional illumination for a safer entry. Maitland says the driver’s cockpit is best-in-class in functionality, ergonomics and aesthetics featuring improved visibility and more driver legroom. Because of its shorter length, the J3500 also has a tighter turning radius than any other MCI vehicle and is highly maneuverable in tight city environments. 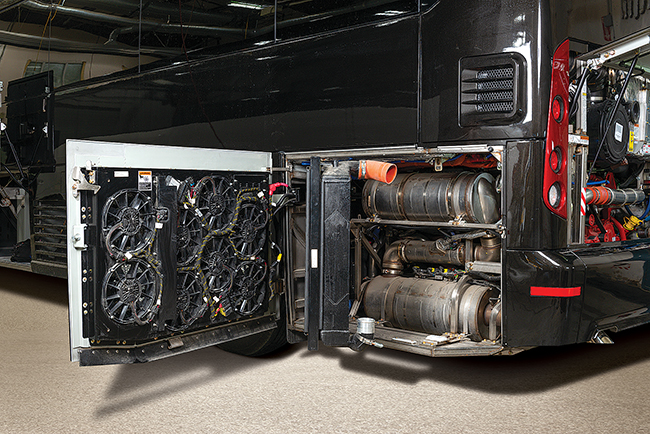 Maitland says that safety is always the top priority for MCI’s engineers, and to that end they outfitted the J3500 with a standard tire pressure monitoring system, automatic fire suppression, electronic stability control and three-point passenger seatbelts.

“The Bendix Fusion system’s functionalities keep the J3500 in a leadership position when it comes to Advanced Driver Assistance Systems,”  Maitland says.

Because of the J3500’s commonality with the J4500 in electrical, HVAC, suspension, frame, body and brake components, operators who already own MCI vehicles won’t have the need to carry unique spare parts.

In addition to being supported by the full-service network of NFI Parts, the J3500 is backed by MCI’s standard Super-60 limited warranty. It extends coverage on many of the coach’s components up to five years or 500,000 miles and expands coverage on others.

“MCI stakes its reputation on reliability,” Maitland says. “We have the industry-leading warranty, as well as the parts and componentry distribution network to keep these buses running for a long time.”

MCI has been touring the United States and Canada with its signature Reliability Rallies this summer and offering operators the first chance to test-drive the J3500. One such operator is Andrew Hillard, president of Tri-State Travel.

Tri-State Travel, founded in 1939, operates a fleet consisting entirely of J4500 coaches by MCI. The company services Illinois, Iowa and Wisconsin from two locations. Hillard, a third-generation owner-operator, says he is expecting delivery of two J3500 coaches in early 2019.

He plans to use the vehicles primarily for tour and contract work with local colleges, universities and high schools. Tri-State Travel conducts many day-trips for school sports teams, which don’t require a full 56-passenger bus, and the J3500 will allow him to provide a better price point.

“Schools are definitely looking for smaller vehicles,” Hillard says. “The J3500 is a perfect match for basketball, soccer and cross-country teams – because if the customer can get just a little bit of cost savings, that’s huge for college business.”

Hillard says the commonality with his currently fleet of coaches made the purchase of two J3500s an easy choice. Maitland adds that this natural progression, from J4500 to J3500, is exactly what MCI was aiming for when designing the new coach.

“It was important for us to develop from the J-Series platform,” Maitland says, “because the J4500 is the industry’s leading full-sized luxury motorcoach, and we intend for the J3500 to be its counterpart in every respect”.