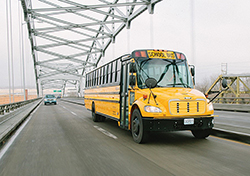 Beginning with this issue, each  Safety Solutions column will focus on a different bus operation in the United States – the safety and operational issues they face, and how putting together a comprehensive risk management and insurance program helped their business and bottom line.

Although its locally-managed, family-owned status might suggest otherwise, Apple Bus Company is a large and growing bus company with operations in seven states. From its home in Kansas City, MO, Apple Bus is a full-service transportation contractor active in student transportation management, public transit and on-demand van service, as well as transportation consulting, technology enhancement and management.

In 2013, the company had come to a crossroads with its insurance program because of its rapid growth.

“For the life of company, Apple Bus had been on a first-dollar coverage insurance plan with our previous provider,” says Drew Tarwater, director of support services at Apple Bus Company. “Our commercial auto liability plan was fully insured through our carrier, but we were expanding.”

Although they had a good relationship with their then-current carrier, Tarwater and his team thought it might be good to explore new options. As an expanding operation, Apple Bus could afford to be a little more “creative” with its coverage,

A new partner for new markets

“When we were introduced to Protective Insurance, it immediately felt like a perfect fit,” Tarwater says. “We were growing in the area and moving into new urban markets, one of which was New Orleans – a tough market by any standard. That market was a major reason we switched carriers, as the corresponding insurance costs with our old carrier were going to be through the roof.”

As a result, Apple Bus entered into a large deductible plan with Protective – a stark departure from the company’s previous first-dollar coverage plan.

“When we’re going to help a company take on risk in a new market, we are going to go above and beyond in providing value to them,” says Scott St. Clair, client executive at Protective Insurance. “Our expertise in the transportation world becomes paramount.”

Tarwater says that the first benefit Apple Bus saw was an almost-immediate reduction in costs.

“Protective Insurance saved us nearly $1 million in hard premiums,” he says. “At the end of the day, a portion of that money went toward claims we would have previously paid with our first-dollar coverage. It represented a considerable amount of cost savings.”

Secondly, Protective Insurance and Apple Bus have teamed to move toward a more proactive claims management style, which has significantly improved communications and loss mitigation.

“It’s not only understanding how to better manage claims and mitigate losses, but working with the Protective loss prevention team has really helped to solidify our safety and risk departments,” Tarwater says. “It helped us in the advancement of safety policy and best practices. They’ve given us a great long-term resource for improving operations.”

Futhermore, Tarwater says Apple Bus is in the process of getting managers more involved in logging accident data, so they have at their fingertips the tools to analyze trends. As the managers become more actively engaged in the process, they can see those trends as they’re happening in real time.

“Apple Bus is a sponge for knowledge and understands a true partnership – they give us hard, honest feedback and we give them honest conclusions,” St. Clair says. “It’s the best way for a transportation provider and insurance carrier to interact.”

“Having Protective Insurance as a partner gives us great confidence as we grow and we continue to move into new markets,” Tarwater adds.