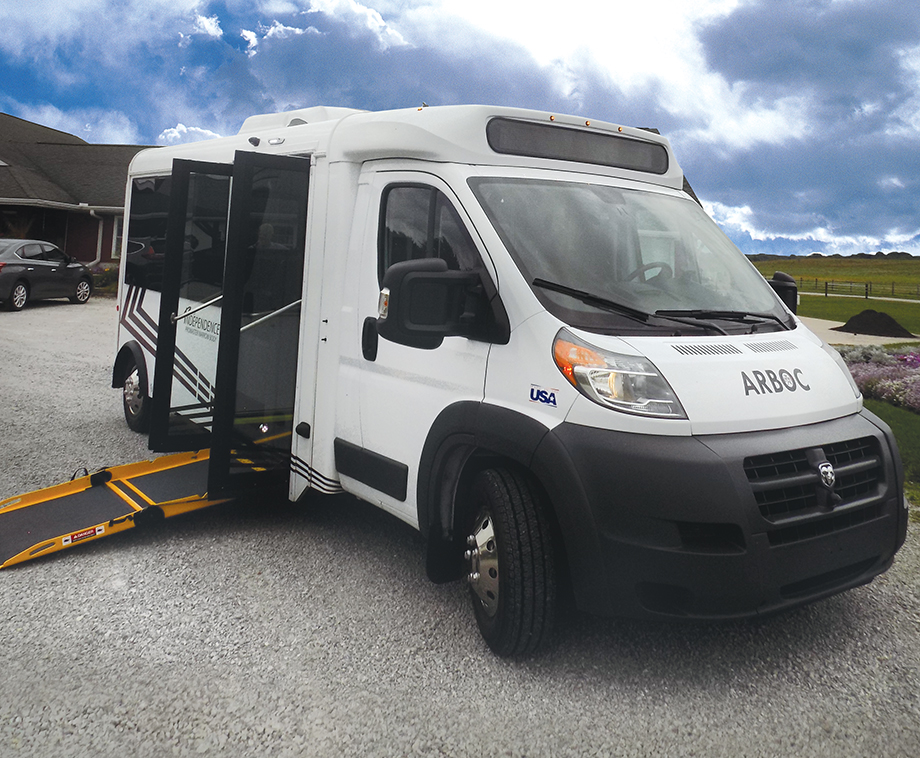 “The van market is huge in North America,” said Don Roberts, president/co-founder of ARBOC, a U.S. subsidiary of NFI Group. “Many smaller cities, with populations ranging from 3,000 to 5,000, only utilize vans because that’s what’s affordable for their budget. This new product, with its versatility, accessibility, and low price point, will allow for more variety in that market.”

Roberts said that the company’s principle of “Equal Access for Everyone®” means that passengers of all abilities are treated alike, a concept that is profoundly missing from many van models.

The new Spirit of Independence’s 1:6 ramp slope (in its kneeling position), combined with it’s flat-floor concept, offers smaller agencies the chance to provide that equal access to their customers.

“The bus, a low-floor with a narrow body, allows wheelchair users to enter into the vehicle via a ramp, as opposed to a lift,” Roberts said. “For ambulatory riders, especially elderly clientele, the ramp is easier to navigate than the narrow stepwells of a passenger van.”

The Independence’s wheel wells, unlike those which normally intrude into the interior of a bus, are covered by the vehicle’s seating arrangement. This special configuration allows for up to 12 ambulatory or three wheelchair passengers, with customization to suit the needs of the individual agency or operating company.

“This layout is notable,” Roberts said, “because many vehicles only allow for persons in a wheelchair to sit behind the wheel wells – making it a bumpy ride for the most vulnerable of passengers. By effectively hiding the wheel wells, ARBOC has optimized the ride for everyone.”

A superior turning radius combined with the available body widths of 96 (wide body) or 80.5 inches (narrow body), make the Independence an ideal fit for use as a shuttle within assisted living communities, in the hospitality market, and even paratransit and fixed-route services in neighborhoods with tight corners and narrow streets.

“There is an abundance of competition in the private, small-vehicle market among standard-floor manufacturers,” Roberts said. “But the ARBOC Spirit of Independence Kneeling Bus is the only completely low-floor, flat-floor option for these applications. It offers improved ride quality and handling, and the turning radius prevents the common parking lot tail-swing accident.”

The Spirit of Independence Kneeling Bus is powered by a
3.6 L Pentastar V6 gas engine, achieving a fuel economy of 9-13 mpg, depending on terrain and the driving habits of the operator.

Always looking for the newest technologies and efficiencies, ARBOC also included a Bergstrom Solar Energy System installed on the roof, adding up to 10 hours of bus run-time without idling the engine. By extending the battery life by up to 200 percent, the solar panel system helps reduce maintenance costs by reducing the frequency of costly DPF cleaning and oil changes. In July, ARBOC unveiled a new partnership which will see Rear View Safety (RVS) Systems’ technology available as an option on all ARBOC buses – including an ARBOC-exclusive, collision avoidance system.

RVS, a Safe Fleet company, outfitted the test-drive Spirit of Independence with the RVS Eagle Drive 360° System combined with Eagle Drive ADAS (Advanced Driver-Assistance Systems). Utilizing cameras positioned around the bus, the system stitches together a composition 360° image of the vehicle and its surroundings. In-monitor collision avoidance signals allow the driver to focus on the single screen for both functions. The RVS-128 Advanced Blind Spot Sensor System features two waterproof sensors and an 82-foot detection area.

“It’s important that the safety features can be seen from the peripheral vision of the drivers, so they are not taking their eyes off the road, for the added protection of the passengers,” Roberts said.

In addition to the collision avoidance technology, the Spirit of Independence featured the RVS-335 iVue Driver Fatigue System, which uses an intelligent camera to detect drowsiness in the eyes of a driver. It detects bloodshot eyes and drooping eyelids, even through darkened sunglasses. In the event of drowsiness, the system sounds an audible alarm to alert the driver and simultaneously notifies dispatch.

“We’ve seen high demand for driver fatigue systems,” Roberts said. “Fatigue is one of the biggest complaints when it comes to drivers, so the system is a natural fit.”

All ARBOC vehicles now offer the optional Mobilemule TM 5500, a wireless fleet management system. The system’s built-in GPS is powered by Google Maps, and its mobile video records operation, speed, and location. It alerts dispatch when a vehicle deviates from its programmed route, and the system’s military-grade vibration and shock rating make its video capability invaluable in the event of an accident.

“A few years ago, I observed that the automotive industry was advancing toward this type of technology,” Roberts said. “We started working with RVS at that time, as they were already supplying us with an integrated back-up camera. Now, thanks to our relationship with them, we can sell this entire technology package for one-third of its normal market price.”

ARBOC’s headquarters, located in Middlebury, a small community in Northern Indiana and home to nearly 20,000 Amish residents, is not far from the bustling University of Notre Dame in nearby South Bend. As such, transportation varies from rolling-rural areas, to the tighter urban streets and college routes.

The South Bend Public Transportation Corporation (Transpo) provides fixed-route and paratransit services to the communities of South Bend and Mishawaka, Indiana. For this Road Test, BUSRide called upon the services of veteran Transpo driver Steve Redman. Redman has worked with Transpo for over 41 years and is the current president of the Transpo drivers’ labor union. Redman’s normal transit routes vary, but his tenure at Transpo ensures he typically gets first right of refusal on the routes most preferred by the drivers.

BUSRide, along with Laura Becker, Marketing Manager for ARBOC Specialty Vehicles, met with Redman at the Transpo headquarters, just outside of downtown South Bend. We began the 45-minute drive east toward Middlebury, using US 20 Highway to gauge the vehicle’s throughway driving.

“The pickup is really good,” Redman said. “This bus will definitely ‘get up and go.’”

Redman’s drive took the bus along the Indiana Heritage Trail and its famous Quilt Gardens in the Amish countryside, through the communities of Middlebury, Shipshewana, Bristol, Goshen, Elkhart, Nappanee, and Wakarusa.

“The Spirit of Independence handles really well on these roads,” Redman said. “It feels much more like a car or van than a transit bus. At one point we were buzzing along close to 60 miles per hour, and the bumps were insignificant.”

Although the route did not have many intersections, it was necessary to make a few stops for traffic and pedestrians – on these occasions, Redman commented that the vehicle’s braking was responsive. In the few instances that he needed to turn around, he found the Spirit of Independence’s tail-swing easy to control.

Redman, who sits taller than the average driver. said he preferred the normal lumbar seat in his transit bus for long days, but otherwise found the cockpit easy to navigate, and the headroom throughout the bus easily accommodated his height. Even as a seasoned driver, the upgraded suite of RVS technology provided by ARBOC was entirely new to him.

“I think I’m most interested in the cameras, and the driver fatigue system,” he said. “That kind of technology would do a lot for the safety of transit drivers and passengers.”

“Overall, I’m very impressed with the Spirit of Independence and especially with the extremely clean, and professional ARBOC Specialty Vehicles’ facility,” he added. “It was fun driving a new bus.”

BUSRide’s Road Test used the prototype Spirit of Independence Kneeling Bus, with more units currently in production, and Roberts said dealer feedback to the vehicle has been largely positive. The vehicle’s open and spacious floorplan with its technology upgrades and maneuverability, have been the main points of interest, he said.

“Anyone can drive it – bus drivers, van drivers – it’s an ideal layout,” he said. “We took a meticulous amount of time to look at every aspect of ownership, and then we packed tremendous benefits into this little bus.”