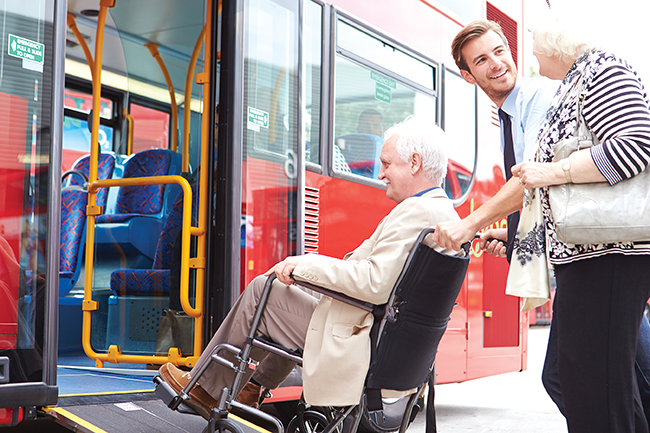 BUSRide recently spoke with John Walsh, president and COO of Davey Coach Sales, Denver, CO, about the state of passenger accessibility in modern transit – and where the industry needs to go now.

In your estimation, in what areas is transit accessibility deficient or lacking? What are the most viable solutions?

There are three transit major segments: Paratransit, Fixed-Route and Rail. Since the Americans with Disabilities Act passed in 1990, I think the paratransit and fixed-route segments have done an excellent job of bringing fleets up to standards for accessibility.

I believe the fixed-route segment has done the best, specifically because of the incorporation of low-floor vehicles. They offer a much more mainstream, accessible experience for riders because there are no steps, and ease-of-entry is so much better.

About 12,000 vehicles are sold annually into the paratransit segment, but only about 600 of those are low-floor vehicles. In this way, paratransit should take a lesson from fixed-route. It would lower risks for riders and enhance the paratransit customer’s experience. Furthermore, low-floor bus manufacturers have done a great job at getting vehicle costs under control. That makes the low-floor bus a very viable option for paratransit operations.

Rail, however, is the transit segment most lacking in accessibility. It’s disappointing to me, being in this industry for almost 30 years, to read articles, or have conversations about rail systems that don’t allow someone in a wheelchair to board and ride. Whether it be in Chicago or Washington, D.C., rail systems need to get up to speed. Light-rail systems, which are generally newer, are OK in this regard – but heavy rail systems are dreadfully inaccessible.

Accessibility goes beyond the train itself. Passengers must get their wheelchairs down to the platform – so what I’m really talking about is infrastructure. That means elevators in the stations and ramps for the trains.

Can U.S. transit agencies learn accessibility best practices from transits around the world?

The United States is way behind the international community in this regard. Most countries feature transportation as a central part of their culture. In Rome or Paris, people don’t have cars – they’re riding transit. It’s a way of life. In the U.S., transit is viewed as only for people in certain socio-economic situations. It’s need-to-ride versus want-to-ride.

Despite this fact, U.S. systems should seek to emulate the accessibility of international transit systems. Canada mandates that every public bus have a low-floor design, for example.

Another transportation example is in London. All 22,000 of the city’s taxis are accessible. That’s staggering when you compare it to the 600 accessible taxis in New York City’s combined fleet of 15,000.

Where should the industry focus efforts in order to ramp up accessibility?

Because of everything I just mentioned, paratransit funding is critical right now.

The FAST Act’s funding ends in 2020, and Washington is already working on a new bill. I’m concerned, however, because the government is talking about making cuts to new starts and rural transportation, and everything we’ve discussed won’t be possible without that federal funding.

In 2018, people are healthier and living longer than at any previous time in history. We’re going to need these accessible solutions moving forward.