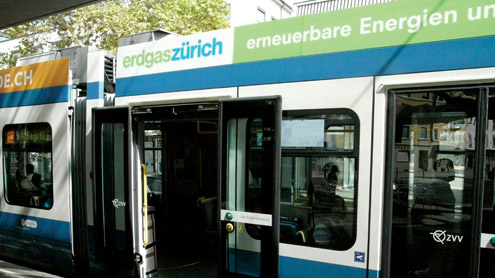 Switzerland is a comparatively small, very mountainous land-locked country of 15,940-sq miles and a population of around 7.7 million. Its 26 cantons or regions each have a fair degree of autonomy on policies. There is the added complication of the country’s four official languages: German, French, Italian and English.

Zurich is one of the most beautiful cities in Europe and well worth a visit. Zurich Public Transport (VBZ) operates a highly efficient public transport system comprised of trams, trolleybuses, diesel buses and even a funicular railway that ascends one of the steep hills that surround the city. On a recent visit to Zurich, board member Andreas Uhl, public relations, and Daniela Tobler, head of guest relations, told me all about their company.

Forty-two public transport operators serve the canton of Zurich and around 1.3 million inhabitants. The public transport authority, ZVV, controls their activities. The largest and most important of those operators is by a long way VBZ, which serves Zurich.

Switzerland has considerable hydro-electric power generation. As it can be seasonal, nuclear power is an occasional supplement. VBZ insists with its suppliers that all its electricity comes from hydro stations, thereby ensuring a renewable supply.

Switzerland suffered in the two World Wars because of its dependence on coal supplied by Germany. Consequently, it rapidly introduced electric traction on the railways and public street transport. Today 85 percent of passengers in Zurich travel by electrically powered transport.

Diesel buses tend to operate in the suburbs and on peripheral routes, often acting as feeder transport to trams and trolleybuses. By the way, a trolleybus is not a vintage style vehicle in Europe, but a very modern product that draws current from overhead wires.

Today, VBZ operates 14 tram routes, one opened only recently. Running on a track width of only 39.3 inches is relatively unusual, but popular in Switzerland, compared with the normal European standard of 56.5 inches. They have an overall width of just under8 feet. Longer trams run on the busiest routes to maximize passenger capacity.

There are still more than 200 of the older 2000 series trams in operation, which full low floor Bombardier Cobra units in five articulated sections are gradually replacing. There are nearly 100 of these modern trams, but it is likely to be many years before the whole tram fleet is low floor.

While trams serve many of the busiest routes, and are highly visible in the city centre, there is also a modern trolleybus system. VBZ has a number of highly specified trolleybuses in the course of delivery from Hess, the Swiss manufacturer. When those arrive, all the trolleybuses will have floors only one step above the ground.

There are quite a number of 80-foot. bi-articulated vehicles. They have steering on the first and fourth axles, with the second and third axles driven to handle difficult conditions in the winter. Though large, they are highly maneuverable, capable of making 90-degree turns in the same place as a standard 40-foot. bus.

The latest models now being delivered have lithium-ion batteries kept fully charged from the overhead wires to store electrical energy. These buses can run up to one mile off line if a diversion is necessary. It also means that they are totally emission-free at all times.

Although electricity is comparatively inexpensive in Switzerland, VBZ ensures energy recapture through regenerative braking while descending the many hills. The electrical power sources for trams and trolleybuses are inter-connected. The electrical energy generated during braking of a trolleybus feeds into the power network for trams. The VBZ electrical system is in 40 segments. If one goes down, the remaining 39 are unaffected.

At the last census in Switzerland as a whole, there were 671 cars per 1,000 people. In Zurich that figure is around 360 per 1,000 and decreasing. Andreas Uhl says there is no need to own a car, considering the high cost of parking in the city centre. There is an excellent city-wide mobility system, where members can rent a car or transit van by the hour or day, whenever they require. Furthermore, as in many European cities, it is not easy to get around by car. Public transport benefits from priority systems, often creating faster point-to-point journey times.

Already, around 60 percent of commuting in Zurich is by public transport. Last year, the citizens of Zurich held a referendum on the future of public transport. The objective was to achieve a 10 percent increase in the present modal split between public and private transport by 2020. More than 50 percent voted in favor of the proposal.

VBZ reckons that every resident of the city is within 300 yards of the nearest transport stop. There is a simple zonal fare system with tickets pre-purchased from machines at each stop. Local taxpayers meet 40 percent of the costs of VBZ. The new targets will mean that at least two of the busiest routes currently operated by diesel buses will convert to trolleybuses.

I asked Daniela and Andreas the reason for such as massive endorsement of public transport. They reckoned there was no one specific factor. Many people already enjoyed the convenience and frequency of the VBZ system, but others were concerned about traffic congestion, traffic noise, air pollution and emissions. Bearing in mind that snow normally starts to fall in Zurich in November and can be bitterly cold, this shows great confidence in public transport.

There is no metro system in Zurich. The city lies at one end of a large lake and is bisected by a fast-flowing river. The water table is quite high in the relatively flat city centre, making tunnelling difficult and very expensive.

VBZ reckons that it costs around $75 million per mile to build a new tram line, with large-scale disruption to businesses and residents on the route. A fairly recent extension takes the trams right into Zurich’s Kloten Airport, an important European hub.

At present, most of the routes run across the city centre with a number of excellent interchange facilities. New plans envisage improvements to outer-city routes, linking suburb to suburb. Diesel buses still may best serve some.

Daniela kindly gave me an all-day pass to sample the network after our meeting. There is excellent real-time information at all the main stops. All the vehicles are in immaculate condition, free from any damage, internally or externally. They have priority at traffic lights and some streets are reserved exclusively for public transport. On one random tram journey, when we reached the terminus, two cleaners came on board, emptying garbage bins and removing unwanted newspapers and magazines from seats.

In many cities around the world, public transport is for people who have no alternative. In Zurich, all types of people take public transit, including some who are very smartly dressed. They might well use the tram to get to and from work in the week, but take the BMW out to the mountains on the weekend.

The whole operation of the transport system in Zurich is overseen by a central control room. They can contact every driver by radio. In the event of a problem, they can quickly arrange for diversions and alternative routes, causing the minimum of disruption to passengers.

I strongly believe that the world cannot carry on consuming fossil fuels at the present rate. It is imperative to find alternatives. It was therefore very impressive to find that VBZ, already carrying 85 percent of its passengers on vehicles powered by renewable electric energy, is planning to increase that percentage.

Rome was not built in a day, and neither are the most sophisticated and efficient transport systems. It takes political will, public support and high levels of investment over a long period of time. BR