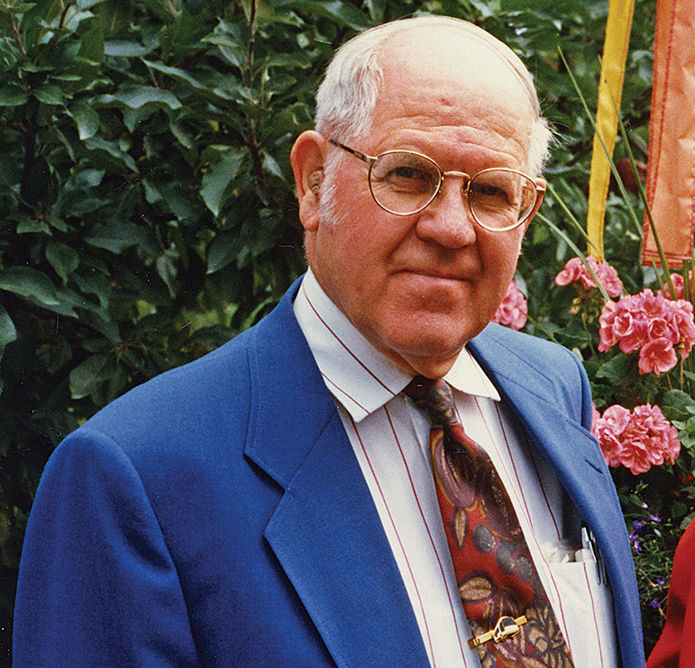 Historian, author, and founder of BUSRide Magazine, William A. Luke – known around the industry as Bill Luke – is being remembered for his memorable life and awesome contributions to the world of transportation. Bill passed on Jan. 23 at age 97 in Spokane, Washington. In addition to his roles as BUSRide founder and bus historian, Bill was an acclaimed author of multiple books on the bus and motorcoach industry. He was the creator of Bus Garage Index, the Bus Industry Directory, and the BUSRide Bus Maintenance Forums, an inductee into the American Public Transportation Association (APTA) Hall of Fame, and an avid collector of bus and motorcoach memorabilia.

“I can think of nobody like him,” said David

Millhouser, former writer for Bus & Motorcoach News. “He was totally unique. Nobody knew more of the history of the industry, and nobody was more liked and respected than Bill.”

Born in Duluth, Minnesota, an area noted for several early bus companies, including Greyhound and National City Lines, Bill developed a passion for buses and bus travel at a very early age.

“Back in 1930 when he was a kid, he became fascinated with buses,” said Rich Broderhausen, Bill’s longtime friend and pastor. “Travel by bus was beginning to be a big deal as trains became more interested in moving freight than in moving people. That really opened the door for more and more buses and Bill just saw the bus transportation industry as a real key

ingredient in the economic wellbeing of our country.”

His career in the motorcoach industry officially began in 1948 after his return from the military following World War II, where he had served as a clerk for the 336th Engineering Battalion which landed on D-Day at Normandy Beach in France. After settling in Minneapolis, Minnesota, Bill would spend 21 years with Jefferson Lines Transportation Company, and

another five with Empire Lines in Spokane, Washington.

In 1964 Bill and his wife Adelene, who had her own industry experience (she worked with Northland Greyhound Lines and later as a travel agent at the Greyhound Travel Bureau at the bus terminal in Minneapolis), began presenting seminars to the industry on maintenance, safety, and similar topics,

conducting up to 10 seminars a year all over the United States, including Alaska and Hawaii.

A year later they founded the company Friendship Publications, home not only to BUSRide Magazine but more than 15 books chronicling the history of the bus industry.

Written by Luke, often with help from his friend and collaborator Linda Metler, these books offered a glimpse into the dawn and evolution of the industry through text and photographs, presenting a detailed look at many of the companies that were instrumental in its foundation.

“Bill knew everything there was to know about the industry,” Metler said. “You could ask him just about anything about a bus or particular model and he had the answer. He kept notes and took photographs everywhere he went. He was always journaling and that came in handy later.”

After moving to Spokane in 1969, Adelene was working full time for their business while Bill worked part time, in addition to his full-time position at Empire Lines. By 1973, the business required both of their full-time attention and was incorporated as Friendship Publications. Adelene was named corporate president and wrote the main editorial for issues featuring influential women in the industry. She played an indispensable role in the founding and operation of their business. Adelene passed in 2016 at age 88.

The couple traveled extensively over the years, attending meetings, visiting bus companies, and sharing their passion for buses through their Bus Maintenance Forums. They visited over 70 countries and made many friends along the way.

“Bill brought me in to help with the Bus Maintenance Forums around 1986,” said Halsey King, industry expert and consultant, and longtime

friend of Bill. “By that time, they had already been around for 25 years. My job was to help coordinate and put the events together. We did them virtually in every nook and cranny you could think of. We even did them in Long Beach, on the Queen Mary.”

King recalled his many travels with Luke and visits to their family home in Spokane, Adelene sitting in the backyard tending her flowers while King and Bill chatted in the kitchen.

“If Bill knew you, he knew your family,” King said. “He remembered everyone he met. He was just that kind of guy. A great communicator and a great connector. I’d walk into a room and say, ‘I’m friend of Bill,’ and that would open doors. Everyone knew him and everyone liked him.”

After 30 years, Bill and Adelene were ready to downsize their business, and in 1996 the couple sold Friendship Publications and BUSRide Magazine to longtime friend and industry colleague Judi Victor.

“I had known Bill for a long, long time and done some writing for his magazine,” said Victor, now publisher of BUSRide Magazine. “Bill’s Bus Maintenance Forums were the reason that we started exploring the maintenance side of things, which eventually spun off into BUSRide Maintenance, which has grown into a free-standing publication. Bill really opened our eyes to that whole aspect of the industry, and he was there in the early years helping us to put that all together. He was always a phone call away if we needed anything.”

In 2009, Luke donated his considerable assortment of photographs, periodicals, tour and travel literature, and countless other materials to The Henry Ford museum in Dearborn, Michigan.

“I clearly remember the thing that caught everybody’s eye were the bus models that Bill had put together,” said Matthew G. Anderson, curator of transportation at The Henry Ford. “He had close to 100 of them all painted in liveries. Just the fact that he made them himself, we admired that kind of ingenuity. It was an exciting opportunity to acquire an amazing collection assembled by a man who I think undoubtedly, was the most knowledgeable collector of the industry.”

“Bill was someone who knew what was needed to document the industry. He knew a great deal about the industry and was able to identify and seek out those materials,” Anderson said. “Sadly, we’ll never have the knowledge that Bill himself personally possessed, and I don’t think there was anyone who could touch him in that regard. But some part of him and his work will survive through this collection.”

Anderson noted that The Henry Ford is slowly working to digitize more of Bill’s collection so that materials can be made available to anyone who is not physically able to visit the research center.

Bill began talks with Northwestern in 2010 after searching for a suitable place for his international collection.

After two years of back and forth, Roberto Sarmiento, head of the Transportation Library, traveled to Spokane to visit Bill and his collection.

“I spent three or four days in Spokane and I was blown away,” Sarmiento said. “He had several collections with several different types of materials. Rare items, books, magazine serials, photographs, postcards, stamps, transit maps and tickets, a collection of neckties, hand carved buses, on and on. Bill gave us somewhere over 20,000 items, and we’re still processing some of it.”

The library has since created finding aids for his collections. Much of the material has been digitized, and several physical and digital exhibits have been featured over the years.

“Bill impacted the business with his publication and his contacts and his involvement within the industry, but also the research value has been incredible,” Sarmiento said. “Being accessible, making his collection accessible to researchers and the public. His gifts will be able to advance research on this very niche subject utilizing these materials that we didn’t have before. We have this huge collection and we’ll always be grateful of his generosity and his support.”

Bill Luke’s final project was an autobiography he had been working on with Metler and Broderhausen for several years and had hoped to finish by his 98th birthday.

“It speaks a lot about the history of the industry and also his personal life,” Broderhausen said. “He always liked to tell funny stories and share his anecdotes and that’s quite a bit of what will be in this autobiography. He wanted to mention basically everybody he met, which is thousands of people.”

Both Metler and Broderhausen plan to have the book completed by Bill’s Memorial Service which is scheduled for May 21st in Spokane.

Bill’s contribution, not only to the industry, but to those within in it will not soon be forgotten.

“Bill had the gift of making everyone feel important, no matter who they were,” Broderhausen said. “He always did his best to recognize the good in people and to treat everyone with kindness, love, and respect…and a sweet smile. And he impacted thousands and thousands of people in that way. And of course, that’s what we all need to be doing. That’s what our world needs right now.”

For those wishing to send flowers or cards please mail to: