Viking River Cruises just announced that it has ordered two more ships in the Viking Longships class for delivery in 2012, bringing the total of new vessels to six. This announcement marks an unprecedented number of ships launching in a single season, an accomplishment that eclipses Viking’s own record of four ships christened into the fleet in 2001. 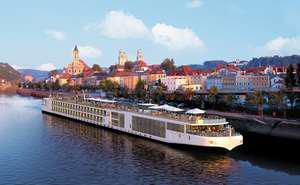 “Ever since we announced the introduction of the Viking Longships earlier this year, the response has been overwhelming,” stated Torstein Hagen, chairman and CEO of Viking River Cruises. “To accommodate the demand, we have decided to accelerate the new builds schedule and bring two more Viking Longships into the fleet in 2012.”

Building upon the company’s reputation as an industry innovator, Viking is setting a new standard in onboard amenities, energy efficiency and guest comfort. By shifting the corridor one meter and reorienting the staterooms, this patent-pending design of an asymmetrical corridor configuration creates additional space and a variety of stateroom choices. The result is the largest real suites in Europe—featuring separate sleeping and living rooms in each of its Explorer Suites and Veranda Suites—as well as more full-size rooms and full-size verandas than other European river cruise vessels. Plus, three-quarters of staterooms will feature a veranda, French balcony or both.

Each of the state-of-the-art Viking Longships will be 443 feet long, feature 95 staterooms per ship and will boast key innovations such as:

•    Seven 275-square-foot Veranda Suites with a full-size veranda in the living room and a French balcony in the bedroom.

•    Thirty-nine Veranda Staterooms with full-size verandas, each at 205 square feet.

•    Al fresco dining areas on the Upper deck, adjacent to the lounge to present more dining choices to guests.

•    Sustainability upgrades such as energy-efficient hybrid engines, solar panels and an onboard organic herb garden.

Viking River Cruises generous commission policy pays agents commission on everything they sell, with payment 29 days prior to departure; commissions average more than $1,200 per booking. (www.vikingrivercruises.com/agents)