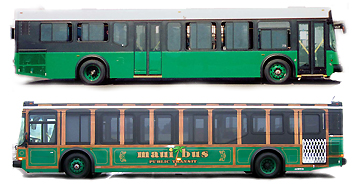 Twelve years ago, sign-painter-turned- illusionist, Stan Mitts, reconfigured his first transit bus into a trolley for Jackson Transit, Jackson, MI. Painting on blank white siding using traditional brush and airbrush techniques, Mitts created the appearance of wood paneling and traditional trolley detailing with pin striping, scrolls and custom lettering. The Bluebird bus underneath did not change in any way but lent the appearance of a trolley car with all the trimmings.

His faux graphics caught the eye of Mike Trahan, a Michigan bus salesman who worked with Mitts to further the creative concept of a convincing trolley look-alike. Trahan sent pictures of the Jackson buses to several transit bus manufacturers.

The concept created enough excitement for the OEM to send their photographers to collect images to pass along to their sales forces and potential customers. Mitts has worked his magic on Gillig and El Dorado transit buses and shuttles, as well as Champion, IC and Turtletop cutaways.

When the DOT of Alabama called on Mitts to apply a trolley motif to the buses in Tuscaloosa, his design subsequently became an official bus option for the state of Alabama.  The sudden attention necessitated Mitts to come up with a method to mass-produce the décor. He moved from hand-painting his wood grain design to kits with printed vinyl clear-coated with UV protection for the décor. Mitts says, to the surprise of many, the vinyl treatment works well on cutaway buses to lend a distinctive trolleyesque-look to an unlikely prospect.

He says designs on the high quality, self-adhesive vinyl can be laminated and cut to create a trolley illusion on any make of any bus of any length at any location. The wood graphics, pin striping and scrolls are included in the vinyl kit, while custom lettering tailored to the design is available at an extra cost, as well as custom artwork and modifications. Mitts can easily replace any damaged panel from his original design.

In addition to transit agencies in Michigan and Florida, trolley illusions appear in traffic in Hawaii, Puerto Rico and Canada.

An agency will typically use the decked-out trolley buses for both daily route service and special occasions. They all report agencies report spikes in ridership along with awards and recognition because of the vehicles. BR